How This Wife Unlocked Her Husband’s Dementia

A year ago last March, my father, Henry Oppenheim, passed away after a long battle with dementia. My siblings and I used to joke that my dad had nine lives. There were so many close calls: a urinary tract infection that ravaged his body and a cardiac arrest that weakened an already damaged heart, to name two.

But somehow, despite the assaults he suffered to both body and mind, my father had a strong will to live. And my mother, Adele, was able to bring that out, even near the end of his life, in remarkable ways (as the short film by my brother Keith Oppenheim shows, below).

Born in Nurnberg, Germany in 1926, young “Hansl” witnessed first-hand the destructive impact of anti-Semitism. In his childhood, my father was the last remaining Jewish child to be thrown out of an elementary school which had become “judenrein” (cleansed of Jews). He barely escaped a brutal attack from a Hitler Youth who was about to drive a nail into his head. Luckily, a neighbor chased away his attacker.

Fortunate to escape Nazi Germany, my father and his family arrived in America in 1938. “I fell in love with the new world at first sight,” my dad wrote years later. He viewed the United States as “a wonderful sanctuary of good will after the turbulence and heartache of troubled European life.”

In many ways, my father was a Renaissance man. A deep thinker, he was knowledgeable about philosophy, history, music and world affairs. Even with dementia, my father retained seemingly esoteric facts. He could talk about Susan Brownmiller, an American feminist journalist, author and activist who none of us had ever heard of, and he could name Warren Gamaliel Harding as our 29thpresident.

He also had a playful, imaginative side. Perhaps because his childhood was marred by trauma and upheaval, my father may have been making up for lost time. Once, I remember he was thrown off an amusement park go-cart course because he continually rear ended his children’s carts. His child-like, slightly irreverent personality, coupled with an ability to harness imagination, may have helped my father adapt so uniquely to dementia.

A Loving Wife and Caregiver

My mother, a remarkably adept caregiver, visited my dad every day in the nursing home. She was able to truly enter my father’s world, without imposing her own reality. Together, they would traipse off to make-believe places and enjoy whatever their minds could conjure, such as midnight waltzes along the Seine and visits to Antofagasta, Chile, where my father would blow kisses to alluring mermaids.

My mother also embraced my dad’s imaginary mistress, “Cunigunde” (pronounced kuh-nee-GUND-uh). In actuality, Cunigunde was married to Henry, crowned King of Germany in 1002, and later canonized as a saint.

For my dad, Cunigunde played different roles. She could be a playmate, lover, maternal figure and friend. To my mother’s deep appreciation, Cunigunde — rather than threatening their relationship — was a source of comfort. The mistress and caregiver provided my father with what my mother could not: ever-present companionship.

(MORE: Generosity May Be What Matters Most in Marriage)

Despite the many challenges my parents faced, they managed to somehow transcend the harsh day-to-day reality of infirmity and decline.

Lessons From My Father

Over the years, my father taught me many things as he bravely retained his personhood, despite the toll dementia takes.

Through his kindness, loving nature, humor and remarkable ability to live in the moment, he demonstrated that quality of life can persevere despite a debilitating illness.

The film ‘Hansl,’ that my brother Keith made, is a tribute to my father’s spirit and my mother’s dedication and love. To the many people who valiantly struggle to care for loved ones with Alzheimer’s disease and dementia, I hope you find some inspiration from our family’s story and, perhaps, some ideas about how you can make connections, too. 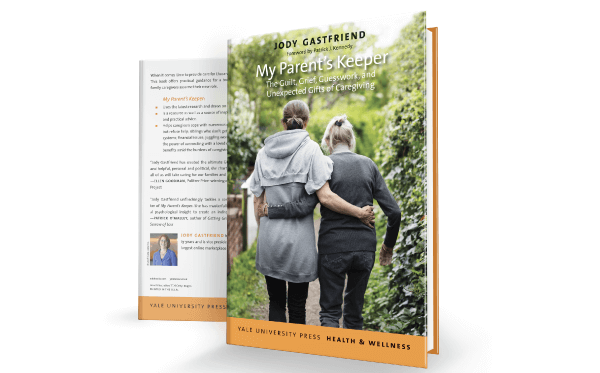 The Guilt, Grief, Guesswork, and Unexpected Gifts of Caregiving

My Parent’s Keeper: The Guilt, Grief, Guesswork, and Unexpected Gifts of Caregiving, by senior care expert Jody Gastfriend, provides fresh, provocative and ultimately optimistic insights into the experience of caring for an aging parent or family member. Using the latest research and drawing on case histories and poignant interviews, the book is a resource as well as an inspiration for family caregivers. The book combines powerful and relatable stories illustrating a broad range of caregiving challenges. For many, the transformational life passage of caring for an aging parent, along with the pain, can bring simple pleasures and a deeper appreciation of one’s own aging.

With a foreword by Representative Patrick J. Kennedy, this essential guide to caring for aging and ailing family members provides actionable advice, illuminating vignettes, and a compassionate approach to helping family caregivers find gratification in their new role.  Beyond the “how to do it,” the book offers “how to grow through it.”